Would you like to live with a curious, affectionate, playful, and sociable ferret? We do not only stock the best ferret cages but also knowledge about how to raise them, look after them and the different type of breeds. They also have long life spans and can be litter trained, making them easier to keep. Their curiosity and playfulness will certainly help entertain you. It is a good thing that you can choose from several ferret breeds  in terms of their colours, markings or patterns. Just pick one to play with depending on which pet ferret suits your taste. 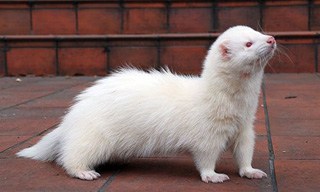 Albino ferrets have a white coat, a pink nose, and pink to red eyes. They mainly look attractive because of their neat white coat, which also makes it easier for the owners to locate their pets even in dark rooms. These ferrets are especially energetic in the morning and love to nap in the afternoons. They should be bathed once a month. Albino ferrets are often kept as a therapy pet for the kids and the elderly. 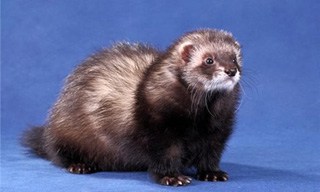 Black sable ferrets are coloured deep black from their nose to the tail tip. Their head also has a hood-like mark that reaches their nose. Their undercoat is of a white or creamy shade. The Black Sables’ guard hairs are dark ash blackish brown without any warm tone. Their eyes are near black or dark brown, while their nose is also ash blackish brown. 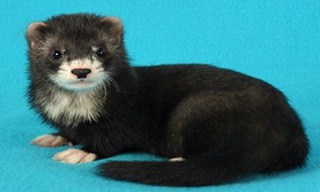 Black sable mitt ferrets have almost the same colours as the black sable, but with four white feet from the toe tip to around two-thirds of their legs. Their guard hairs should be genuinely black with zero to little white guard hairs. Aside from their mitts, they also have a white bib. Their eye colour is black or nearly black, just as it is with their nose. 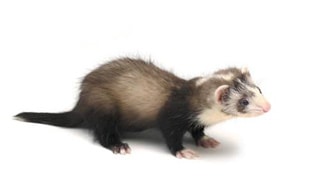 Blaze ferrets have a coat with varied colours. They have a distinct unbroken white stripe from the face to the area between their eyes, over their head and the area down the back of your neck. They also have a white bib and four mitts. These ferrets also have minor colour rings surrounding their eyes. Some blaze ferrets have small masks. 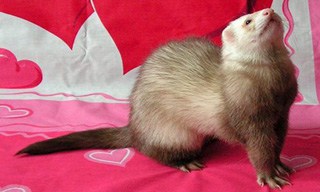 Champagne ferrets have warm milk chocolate brown guard hairs. Their undercoat is white, as preferred by standards, although ferrets with a slight golden hue are also accepted. Their eyes are pink, beige, or pink with a light brown or beige ‘T’ outline. 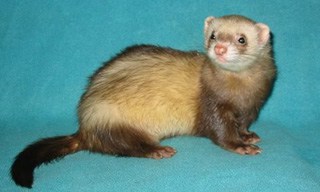 Chocolate-coloured ferrets have basically the same colour as the sable ferrets, except for the banded mask, legs, and tail being dark brown with shades of red. There are dark brown guard hairs covering the neck, body, and head. Their undercoat is covered with cream to wheaten-coloured hairs. These ferrets have black eyes, although some look like they are ruby red. Their nose is brown to pink and has a ‘T’ outline. 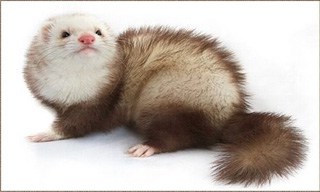 Chocolate mitt ferrets share the same colour as the chocolate-coloured ferrets, but with mitts. 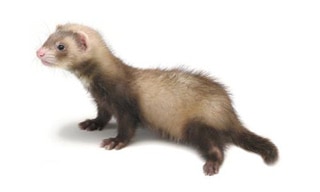 Cinnamon ferrets have reddish brown guard hairs, tail and legs that are still reddish brown but darker, and a pink nose. Their mask colour is of cinnamon shades, complementing the main colour of the ferret. Their eyes are usually light to dark burgundy, although there are some cinnamon-coloured ferrets with black eyes. 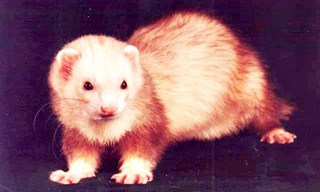 Cinnamon mitt ferrets look just like the cinnamon-coloured type but with mitts. 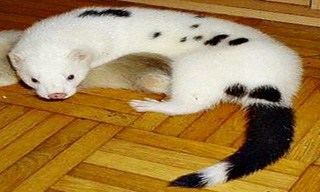 Dalmatian ferrets are mostly white with dark ruby or black eyes. They also sport a pink nose and a pattern of black blotches or spots on their back. However, the rest of the spot-free coat is of any colour aside from black. 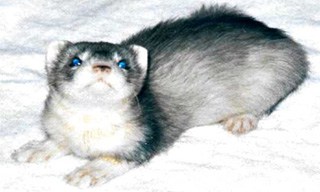 Heavy silver ferrets have a deep, gunmetal grey coat with black hairs. They have a black, mottled or pink nose. Their mitts are a taken and their mask seems like a blotch under the eyes. 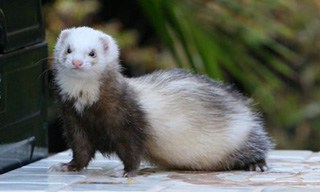 Panda ferrets have a white head, with the white hairs covering the nose to the shoulder area. They have a white bib that covers the entire underside portion of the ferret’s body. Their coloured part of the body has a saddle shape. Pandas are also noted for their pink nose, mitts, white-tipped tail, and eyes that are of any colour. 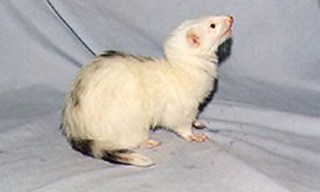 Light-patterned ferrets mainly have white coat with several darker hairs scattered all over the body. They have a ruby, dark or red eyes and pink or black nose. 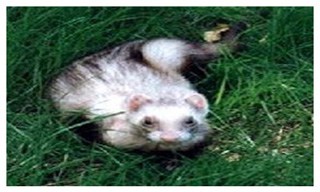 Medium-patterned ferrets look almost like the light-patterned types, but with more areas of their body covered with dark hairs. 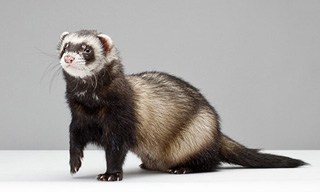 Sable ferrets have a full mask on their black legs. They are also noted for their cream to dark undercoat covered in dark guard hairs. The colour all over their body is of the same shade, especially in the areas including the head, body, and neck. These ferrets have black eyes and a black, mottled or pink nose. 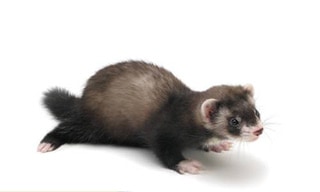 Like many other mitt types of ferrets, the sable mitts look just like sable ferrets except for their mitts. 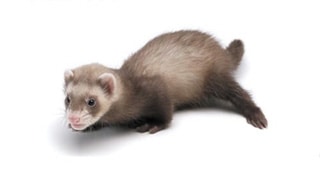 Siamese ferrets are just standard sable, cinnamon or chocolate ferrets with darker shades on their legs and feet. They have a V-shaped mask that is as dark as the colour of their extremities and tail. Their underside is marked with a dark line that has the same colour as the hairs on their legs, feet, and tail. 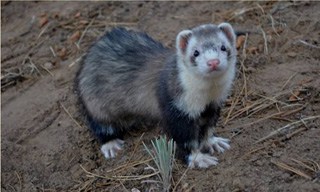 Siamese mitt ferrets have the same colours as the Siamese ferrets, but with mitts. 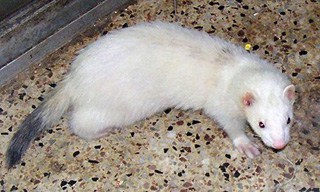 Striped white ferrets mostly have a white coat with a dark line running down their back, particularly tracing their backbone. There are ferrets though with a stripe that reaches their tail. Their nose is either black or pink. Their eyes are dark ruby or pink. 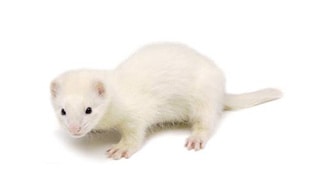 Dark-eyed or black-eyed white ferrets have a white coat, but some of these ferrets have a few dark hairs covering their backbone area. They have a black or pink nose and black eyes.