Guinea pig owners have different reasons why they want to breed their guinea pigs. Some pet owners want to sell the guinea pig babies for their profits.

While some pet owners just want to have more pets to take care. And others might want to share the baby guinea pigs to some of their friends or family or those who wanted to have a pet guinea pig but didn’t have the courage to get one.

Whatever their reasons are, there is a basic guide to follow so that even new guinea pig breeders can have a safe and successful breeding for their guinea pigs.

For pet owners who want to sell the baby guinea pigs, they must be always prepared for the responsibility of taking care of the unsold babies.

Here is a basic guide to breeding guinea pigs.

Owners or breeders with a lot of guinea pigs must now select a healthy boat (male) and a healthy sow (female).

The best age for breeding the sow is around 6 to 12 months, while the boar can start breeding at around 6 months of age. 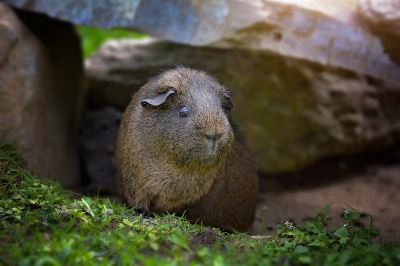 Though the boar and sow can already breed even if they are young, it is advisable to let them both mature first before attempting to breed them.

If you have a guinea pig cage outside your house, it is not advisable to breed guinea pigs during winter times.

It will be difficult to keep the baby guinea pigs warm outside your house or if they are not in a controlled environment.

Start by introducing the boar to the sow.

Most of the time there will be no problem when doing that but it is a good idea to keep an eye on both of them at the start until they are getting comfortable together. 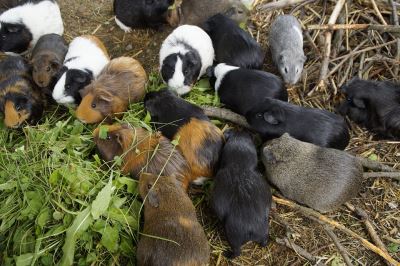 You will see a sign that the boar is interested in mating with the sow as he will often make a somewhat excited chuntering sound and will walk around the sow like a funny stiff legged way.

If all goes well with the introduction, you can now leave the pair together for around 17 to 48 days. The sow will be in heat at around every 16 days. 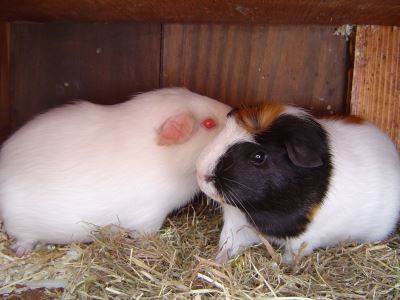 But it is advised to leave them longer because at 17 days or the first heat cycle, it doesn’t mean that the sow will get pregnant, that is why there might be a 2nd or 3rd heat cycle just to be sure.

4. It’s time to separate them.

During day 48, it is time to take away the boar and separate it with the sow.

The reason is that after the mother guinea pig will give birth to baby guinea pigs, the boar might want to mate again with the her.

You don’t want that to happen especially if it is your first time breeding guinea pigs. It is a fact that the boar will not hurt the baby guinea pigs.

5. Check for signs of pregnancy.

The obvious sign that the sow is pregnant is that she will look ungainly like she has swallowed a grapefruit inside her.

But if she will be having a small litter, it might be hard to tell if she is pregnant.

If the sow has other female friends before separating them for breeding, you can let them live again together. 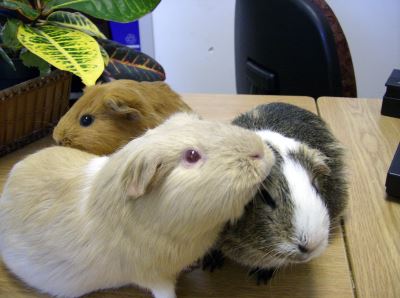 Most female guinea pigs will be happy to be the ‘aunty guinea pig’ to the baby guinea pigs. One important thing to do is to have hay beddings for the sow.

The sow will not make a nest for her babies, so having hay as bedding will ensure a comfortable place for the babies.

Having straw as bedding might cause corneal ulcers to the babies, so hay is a must.

6. The babies are coming soon.

After 9 to 10 weeks of pregnancy (gestation), you must be ready for the baby guinea pigs are coming.

They are usually born at night, but at rare occasions they can be born in the brightness of too.

The mother guinea pig usually gives birth to around 3 to 5 babies without any problems. But if problems happen, contact your local veterinarian immediately. 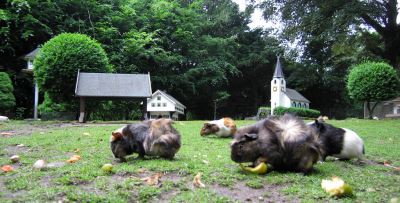 The babies are covered in their birth sac but the sow will clean them off so you don’t have to worry.

Baby guinea pigs are born with eyes open and with furs too and will immediately follow their mother.

It is alright to pick the babies just to check them if they are okay. More importantly after checking the babies, leave them in peace with their mother so they can bond together.

7. Improvement and changes are noticeable among the babies.

At around 2 weeks old, the baby guinea pigs will start to taste and eat solid foods, but they will still be dependent to their mother and continue to suckle for another 2 or 3 weeks. 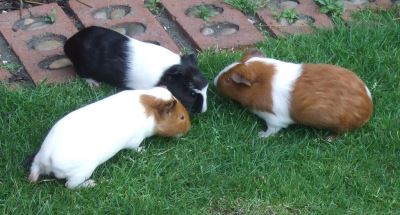 During that time you should start handling the babies regularly so that they will be used to human interaction.

Keep the babies with their mother until they are 6 weeks old.

8. Separate the males from the females.

During the 6th week, separate the male baby away from their sisters and mother. They can already start breeding around that age so you don’t want to risk that from happening.

If you want to sell the babies, they can be sold when they are already around 8 weeks old.

Breeding guinea pigs can be fun and rewarding. Take our tips and you’ll never have a hard time raising these little guys.

4 thoughts on “A Basic Guide to Guinea Pig Breeding”